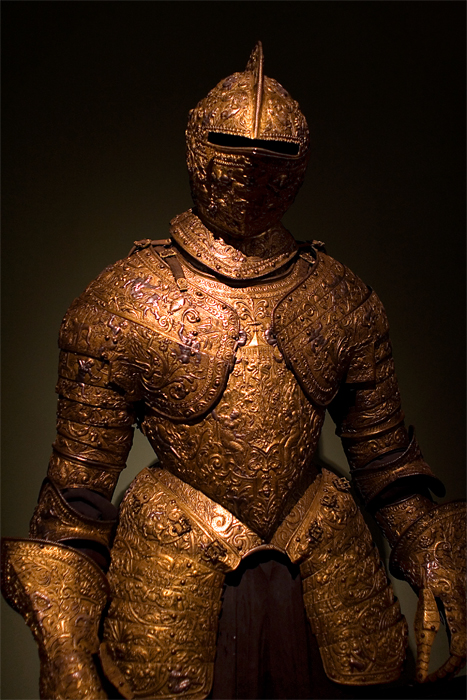 One of the main concerns that my large customers have is that the Citrix Gateway could fall victim to a DOS or DDOS attack. Linked to this, of course, is the concern that – after a successful attack – it might be possible to bypass authentication or compromise the gateway or the appliance.

DOS-Protection for the gateway, general concept and concerns

Citrix ADC, and thus of course the gateway, is inherently very well protected against DoS/DDoS attacks. In many cases, further protection is not necessary at all. I see a necessity at most where attacks are very likely, i.e. in the military field, with governments and with large international companies, especially if they deal with things that enrage certain population groups (I’m thinking of covid deniers, environmentalists, animal rights activists and similar groups). Unfortunately, it is not possible to use the AppQoE feature for this, so we have to work with the rate-limiting feature.

Rate limiting is a very simple function, but it is robust and easy to use. In principle, we would simply count all requests to certain URLs. If there are too many, we block them using responder policies.

In a simple DoS (Denial of Service) attack, a single user tries to send as many requests as possible to overload his victim. So to detect DoS attacks, a table containing only the IP addresses is sufficient. If an IP address sends suspiciously many requests, we block it.

To set a limit, you need to find out how many calls are generated during a normal successful login and how many are generated during a failed one. I would set the limit so that the limit is not reached, even after 10 failed logins. Caution: If your users come from NAT environments, then hundreds of users may share the same IP address. Take this into account in your dimensioning!

DDoS (Distributed Denial of Service) attacks are similar to DoS attacks, but we are dealing with multiple simultaneous attackers. They are usually zombie PCs that send requests controlled from a central location. In contrast to DoS attacks, the aim here is to block requests to certain URLs from a certain IP address when they exceed a certain level. In order to detect DDoS attacks, we must therefore create a table that only contains the IP address and the URL.

The beauty of this is that it is very easy to define limits: A user may access all URLs only once if he enters invalid passwords 3 to 5 times, but not more often.

So the whole thing stands or falls on our ability to keep the tables small.

Of course, we don’t want our DoS protection to affect legitimate, logged-in users at all. Therefore, the policies should only apply until the login procedure is completed. But how do we recognise this? It is relatively simple: As soon as the login is completed, the Citrix ADC / NetScaler sends two cookies: NSC_AAA and NSC_VPNERR.

NSC_AAA is the actual session cookie for logged-in users. This is the cookie that is actually the issue.
NSC_VPNERR contains a status. I wrote about this recently.

There are several tricks to keep the tables small. The most important one is probably not to fill any data into the table that does not belong there. And you can do that by writing a responder policy that drops every request that goes nowhere.
Another possibility is to exclude query strings. I mean, to prevent /url?xxx from being treated differently from /url?yyy. This is done by using HTTP.REQ.URL.PATH as a criterion instead of HTTP.REQ.URL.

Unfortunately, I cannot give you a list of these URLs because it depends on the theme you are using and your customisations. But fortunately, the policy is easy to create.

In any case, we must first create the list. I use a pattern set (mine is called gw_urls). Next, we need to create a policy that drops all requests that target URLs that are not in the list, only for users who are not yet logged in.

If you want to use the GUI: The pattern sets can be found in the AppExpert area. It is an advanced topic, so I only show the command-line version here.

I suggest, dropping potentially malicious requests. However, during the initial phase, my policy won’t drop, but just log, so I use NOOP instead of DROP. I make my policy logging of course.

As you can see, I create the audit policy first. It will log URLs that trigger the policy. I assume that you are familiar with audit policies and how to enable “User Configurable Logging”. Read here, if you are not. User configurable logging needs to be enabled, or it won’t work.
Next, I create the policy, for the time being with the action NOOP, which should later restrict access, and bind the audit policy to it. At the moment, it will just log URLs that are not in the list. Bind this responder policy to the gateway with a priority of 100. 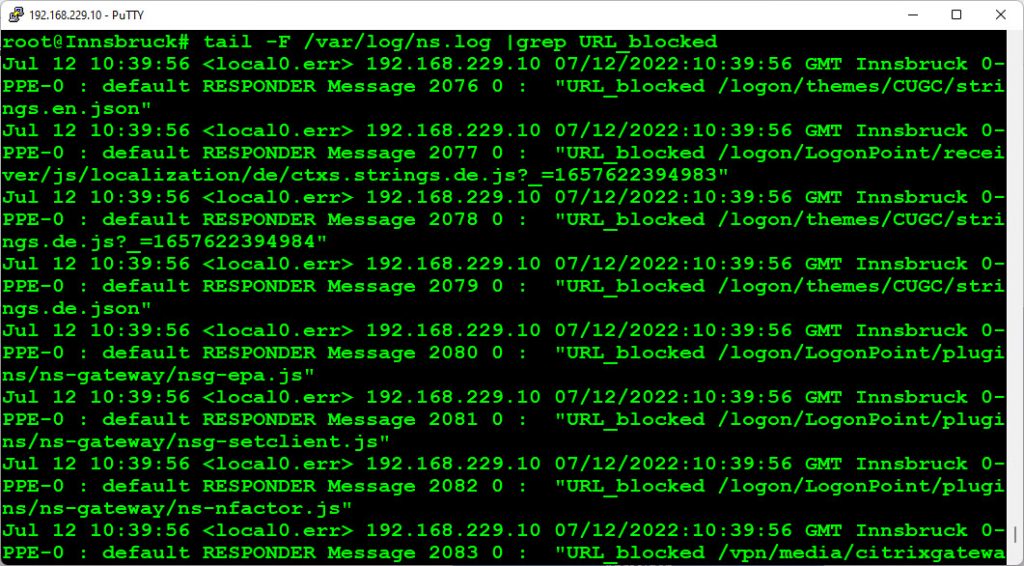 As you can see, all URLs are logged. Now you only have to add the URLs to the list and the first problem is solved. You may make your work a bit easier by extracting a “ready to use the NetScaler command set” from the output by using this shell script: tail -F /var/log/ns.log |grep URL_blocked | tail -F /var/log/ns.log |grep URL_blocked | awk '{ printf "add policy patset gw_urls \""; print $18 }' 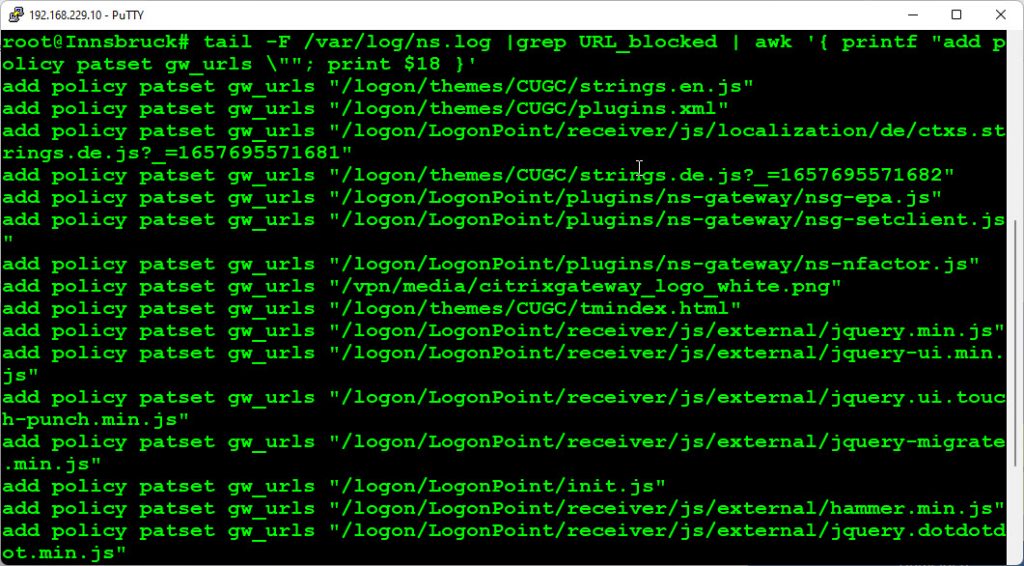 If we know all the URLs, we just have to bind them to the list like this:

I would strongly advise repeating the attempt several times so that all URLs are really on the list. Don’t forget to clear the browser cache in between. Repeat the attempt with the Workspace App (Citrix Receiver, PN Agent, …).

The rate-limiting feature requires a selector (what is counted?) and a limit identifier (how many hits can the entry get?). The result is then queried in a (responder) policy.

We can use the built-in selector Top_CLIENTS. The criterion is CLIENT.IP.SRC. Limit Selectors can be found and created at AppExpert → Rate Limiting → Selectors.

The Limit Selector determines how many requests are allowed at which time. Limit Identifiers can be found and created at AppExpert → Rate Limiting → Limit Identifiers.
As I wrote above: Don’t forget that in NAT environments multiple users can use the same IP address. Many mobile networks NAT their users to the internet! It is better to set the limits too high than too low because the gateway can withstand a lot of requests.

Because DOS attacks are only successful if they are very fast, it is sufficient if we set the limit rather short. My example allows 50 requests in 20 seconds (20,000 milliseconds). My example would allow two to three users from a NAT environment to log in within 20 seconds.

This time we have to create an identifier that contains both the IP address of the user and the URL.

As I mentioned before: I will just use the URL, not the query string. That’s why I use HTTP.REQ.URL.PATH instead of HTTP.REQ.URL. Again, I do this to keep the list short.

I know, of course, that this is a very sensitive issue. I would be happy if you would discuss it with me! Any suggestion or criticism is welcome. Of course, I will mention you if you can contribute anything substantial.